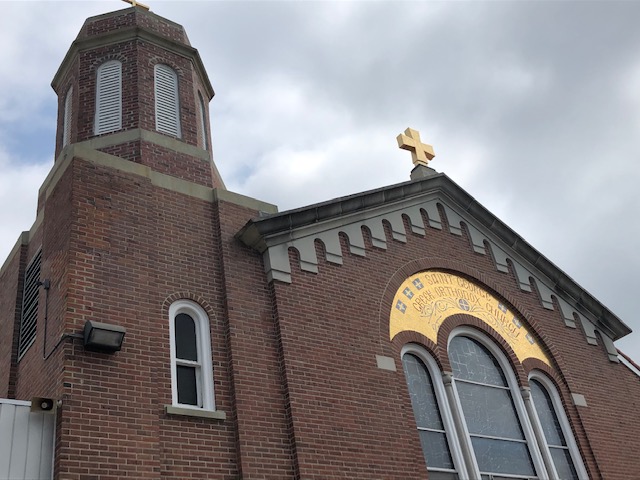 Emigrating from Greece, the founders of the St. George community settled in the centrally located town of New Brunswick. The nearest Church at that time was in Newark, and, as the community grew larger, it was decided that a Greek Orthodox community should be started in the New Brunswick area. In October 1916 organizational meetings were begun and on June 2, 1917, the first general meeting was held. A result of this meeting was the election of the first Board of Trustees. The Trustees empowered with the development of this new community were:

On July 19, 1917, the Greek Orthodox community of New Brunswick was incorporated. Sunday liturgies for the members of this new community were held on the second floor of the Eagles’ Hall, on the corner of Neilson and Church Streets and, as there was no permanent priest, a different priest officiated each Sunday.

Unfortunately despite the selfless contributions and untiring efforts of the early parishioners, the new community floundered. After about a year of existence, the Board of Trustees dissolved and Church services in the Eagles’ Hall were stopped.

Undaunted, a second group of determined men met in 1918 and discussed how to build a permanent Church. Thus the first St. George building fund was spear-headed by Nicholas Chilakos, John Stroumtsos, the Reverend Father Vasilios Daskalakis and Nicholas Konstantakos (who served as Treasurer). Against strong odds, these men undertook a major task of raising money for the new Church. Every single Greek business and every single Greek person were approached for funds to support the new church. And while this was occurring, church services were begun again, this time at the Christ Episcopal Church (also in New Brunswick). At the same time, a Greek School and a new Board of Trustees were formed. John Stroumtsos was President of the new Board.

The cost of the new Church was estimated to be $12,770 and the land on which it would sit would cost $1,300 (total: $14,079). A mortgage of $5000 was acquired by the new Board from the Middlesex Title Guarantee Company. The lot on which the new church would stand was located at 9 River Road in Highland Park. This was considered a prime location because of its central location and easy accessibility to people from surrounding towns. Construction began in 1918 and was completed in 1919. The total cost of this building was $12,770.00. Imbedded in the cornerstone of this building is a bottle containing the listing of the first Board of Trustees, Reverend Father George Spyridakis was the priest when the land was bought, but was later reassigned to the Newark community. The first priest of the newly built church was Father Daskalakis.

The early years of this community were difficult. The treasury often lacked the necessary funds to conduct the Church’s business and the community was called upon to give their time and talents. Examples of unselfish giving abound. Notable are the following: the first paint job was paid for by founder Gregory Mackaronis, Father Daskalakis personally paid for the essentials to outfit the “Ayia Trapeza” and Nicholas Costas would make repairs to the Church when needed. All gave gladly because they wanted a strong community. And because of efforts such as these, the community survived and grew.

The internal strife in Greece after World War I had an impact on the Highland Park community. Between 1921-1928 a rift developed in the community when parishioners took sides on the political issues affecting Greece. Although few records during those years exist, it has been recorded that as a result of the rift, there were two Greek schools and two different congregations that held religious services simultaneously. During this time the first Greek School was begun, a constitution was adopted, a choir was formed and the Philoptochos, St. Barbara, was begun. Eventually the rifts were resolved and the community moved forward into a post-war era.

The beginning of the World War II saw the flight of many young first- generation of Greek men of the New Brunswick community go to war. Sadly, a few did not return. However, during this period, many of the original founders began to consider the growth of the St. George community in a post-war era. With veterans returning to the area and beginning their own families, the founders began thinking in terms of a new church building which would include a community center and classrooms for the Sunday school and Greek School. Thus at the general assembly meeting of December 3, 1944, a building fund committee was created for the purpose of soliciting funds for the construction of a new church and community center with classrooms.

In the years that followed, the fundraising committee continued it efforts. On May 18, 1954, the committee transferred $45,020 to the church treasury – the amount collected over the ten-year period. In March 1959 the general assembly authorized the Board of Trustees to appoint a committee to study the feasibility of building a new church and community center. On June 21, 1960, by an overwhelming majority, the general assembly voted to purchase the land located at the corner of River Road and Riverview Avenue. Upon this approval architect William A. Loumos was retained to begin drawing the plans and specifications as recommended by the Board. Finally, on January 22, 1961, the general assembly voted to approve the plans for a new church.

In any active and thriving church community, the spiritual guidance of the Priest is essential. Throughout the history of the Highland Park church there were several clergy that served the community. From the year of the first Priest, Father George Spyridakis (1918), through the tenure of Reverend Father Nicholas Triandaffillou, the community was served by 12 Priests. In 1930, the records show that 10 Priests served the community beginning with the tenure of Reverend Father Kanellos Kanellopoulos. Father Anthony N. Pappas, joined the community in January 1959 and, in additional to his clerical duties, served as religious consultant for the new church.
Groundbreaking ceremonies for the new Church were held on December 3, 1961. Shortly thereafter Rule Construction Company of New Brunswick began construction. Nine months later, in September 1962, volunteers painted the assembly hall and classrooms. Finally, on December 23, 1962, the first liturgy was held in the new service. Father Pappas blessed the rooms, assembly hall and Church and Communion was administered in the new Church. In March 1963, the Highland Park church was sold to the Byelorussian Autocephalic Orthodox Church of St. Mary of Zurovicy at a price of $30,000.

On May 25, 1969 the new Church was consecrated. The community grew quickly and it soon became evident that it was out-growing the Church building. In 1988 an addition was completed providing additional classroom and meeting room space. And, as the community grew, so did the need for a second priest. In 1991, Father John E. Constantine joined the community. Father Constantine served the community until 1995 when he left to continue his service in the U.S. Navy. The following fall, Father John Theodosion joined the community. Father’s ordination into the priesthood was held in the Church 1996. And also in that year, the community celebrated the 45th anniversary of Father Pappas’ ordination to the priesthood. In 2001, Father Pappas reached a golden milestone, 50 years as a Priest! Father John Theodosion became Proistamenos in 2002 and served the community until April 2004. On May 1st, 2004, the V. Rev. Archimandrite Alexander Kile was appointed as the new Proistamenos and served for almost 7 years until March of 2011 when Father Nicholas Pastrikos joined the community.

In writing any history of a community, it is difficult to write about the very early years in a few paragraphs. The sacrifices made by those first members cannot be understated. These people worked tirelessly, volunteered their talents, and gave of their time and money without complaint. Every effort on their part, either large or small, made the first Church that much stronger and gave us the impetus to move forward to another edifice when it became necessary. The founders left us with a legacy to continue into the new millennium and beyond.

Dedication – Our Odyssey from 1916 until today

On Sunday, the 15th of October 1916, some families from Greece organized the Greek Orthodox Community of New Brunswick – Saint George.  On that historic Sunday, on the third floor of Eagles’ Hall, at the corner of Church and Neilson streets, our Community had its first Divine Liturgy.  Today, we must remember and always honor the great sacrifices of all those who gave so much to us and for all that is around us today.  We thank them and we are grateful to them.

Our Community’s History began in 1916

Our Greek Orthodox Community of New Brunswick - Saint George was founded on Sunday, the 15th of October 1916.  It was legally incorporated in New Jersey on the 19th of July 1917 and is presently operating under its Constitution of the 6th of April 1924.  Our Community was founded to build and maintain our Greek Orthodox Church and our Greek School so that it would educate the children of our Community to speak the language of the Hellenes.  Greek was one of the languages that Jesus Christ spoke and with the strength of Greek, His Teachings spread throughout the world.  Our Community has founded many organizations that contribute to advancing Hellenic culture, traditions and of course, the Greek Orthodox Christian faith.

Our Community’s major accomplishments are:

During our 106-year history, members of our Community have offered much to New Jersey, the other states of the USA, Greece, Cyprus, and to our Greek Orthodox Archdiocese.  As a Community, we have talented professionals in the areas of engineering, education, medicine, law, contracting and construction, restaurants, business, theology, and other professions.  Among our past and present members, we have had a member of the Academy of Athens, a member of the US Congress, local New Jersey politicians, five volunteers to the 2004 Olympics in Athens, seven priests, and four Archons of our Ecumenical Patriarchate.  Members of our Community have fought for freedom and democracy in World Wars 1 and 2, and in other wars.  Some of our members were wounded, and eight of them were killed and never returned to their families and to our Community.

We can really say that our Community has built, at a high point, its own Acropolis of Saint George, with its own Parthenon, a place of worship, the Saint George Greek Orthodox Church, and the remaining important Community spaces.

May God bless our Community, as we continue our efforts, all united, for a better tomorrow.